Can A Pet Save Your Life? A Cardiologist Explains 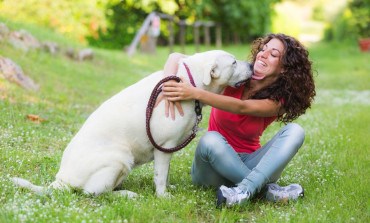 My philosophy in caring for heart patients in the last 25 plus years is that I’m all for having the biggest toolbox at your disposal. If you can improve your diet, great. Exercise, amazing. Stress reduction, bring it on. Herbs, vitamins, yoga, Tai Chi, meditation, sauna, laughter, sleep … go for it! Cardiovascular disease is the number one cause of death and having all programs firing to promote health can make you heart attack proof.

But what about Fido, Lassie, Benji?
Can your pet actually influence not only quality but also the quantity of your life?
My curiosity was peaked by so many of my patients who, when asked how they were feeling, told me about their pets. Pictures, stories and smiles followed. So I went to the National Library of Medicine to see if I had a scientific basis to tell my other patients to join me at the local pet adoption center to rescue a 4-legged friend.
Turns out, back in 1980, Dr. Erika Friedmann investigated 92 patients who had been admitted to a CCU for a heart attack or a serious angina heart pain episode. She gathered information on pet ownership and studied survival at one year. She found that of the 53 pet owners, 50 were alive after a year (3 people died) and of the 39 patients without a pet, only 28 wear alive after year (in other words: 11 died).
Dr. Friedmann followed up her findings in a large study published in 1995 called the CAST study. Patients with heart disease and serious rhythm problems were studied and their pet ownership was collected. Of the 424 subjects, predictors of survival included social support and pet ownership and specifically, dog owners were less likely within one year than non-dog owners to have died. That’s right, hug your dog right now.
Recently, investigators at San Diego State University showed that dog walkers were much more likely to meet American Heart Association recommended guidelines than non-dog walkers. Last year researchers in Japan looked at pet ownership and heart autonomic nervous system health. They found that pet ownership was an influence for healthier heart nerve functioning. They speculated that pet owners’ increased amount of walking was healing hearts.
Any dissenters to the advice that you should kiss two dogs and call me in the morning? Researchers in Australia (at the Black Dog Institute, sounds so sinister), failed to confirm that pet ownership among patients who were released from a hospital with an acute heart issue resulted in a medical benefit.
Actually, they reported that dog ownership was neutral but cat ownership was associated with an increased risk of death and readmission. (Yikes, I guess only cats have nine lives.) They measured walking activity in dog and cat owners and could not find a difference so they could not answer why cat ownership might be a liability.
It does not take a scientific study or a PhD to know that pet ownership can lead to more smiles, laughter, joy, and activity in a household. It is reassuring, however, to know that most of the evidence points to a healing effect on the heart when your favorite pet nuzzles up to your and licks your face. With so many dogs needing a home, and with so many benefits of pet ownership, I hope you consider improving the life of a shelter pet soon, and at the same time improving your own life. I dedicate this to Jake and Eva, my two rescued heart helpers.
Originally posted on MindBodyGreen.com