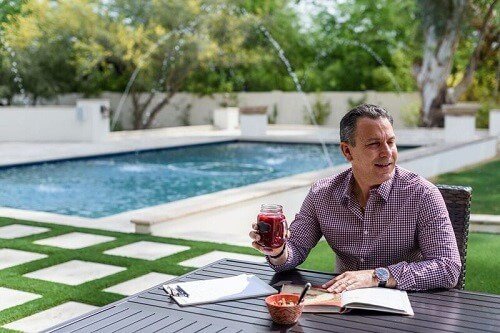 PETA named a Detroit cardiologist who owns a vegan restaurant in Ferndale its “Sexiest Vegan over 50” on Monday.

Dr. Joel Kahn received the honor from the People for the Ethical Treatment of Animals. He’s a professor at Oakland University’s Wiliam Beaumont School of Medicine and Wayne State University of Medicine, and owner of GreenSpace Cafe in Downtown Ferndale.

Kahn is the male winner of the contest held by PETA Prime, a resource for baby boomers. He beat out eight finalists to win a photo shoot at PETA’s Bob Barker Building in Los Angeles and a gift basket from the PETA Catalog.

“Dr. Kahn is dedicated to spreading the word that healthy plant-based meals can stop heart attacks and save animals’ lives,” says PETA Executive Vice President Tracy Reiman. “PETA is recognizing Dr. Kahn for being both a tireless advocate for animals and living proof that vegan eating is key to staying fit, healthy, and active.”

To learn more about why Dr. Joel Kahn advocates for a plant-based diet, check out: ClickOnDetroit.com