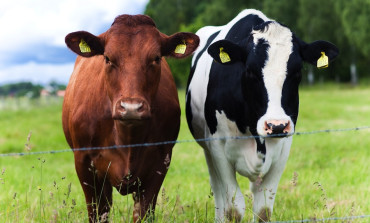 During my cardiology training in the 1980s, I remember Dr. William Roberts, a world renowned cardiac pathologist, pounding the desk saying, “We kill the cows and the cows kill us!”

That was in Dallas, Texas, of all places, just a few miles from the cattle stockyards. Then I read The Lifestyle Heart Trial by Dr. Dean Ornish and the research of Dr. Caldwell Esselstyn at the Cleveland Clinic a few years later documenting the reversal of heart disease associated with plant based diets. I’d heard enough and haven’t eaten meat in over 25 years. I tell my patients to do the same.
Is this an overreaction or is it based in science?
Indeed, in the last 12 months there has been more data than ever indicating that red meat is not on the menu for health and longevity. (Sorry, but science is strong.) A year ago the relationship between eating red meat and early death was reported in over 121,000 doctors and nurses who provided dietary histories and were followed for up to 28 years. Nearly 24,000 people died during the long period of follow up.
Each daily single serving increase of red meat upped the risk of dying from any cause, with processed meats (such as bologna or hot dogs) posing more risk than unprocessed red meat. The risk for cancer followed the same ugly trend. The researchers estimated that avoiding one serving of red meat a day by eating fish, poultry, nuts, legumes, whole grains or low fat dairy would lower the risk of dying by 7-19%.  Not a bad shopping habit to adopt!
Just this month, European researchers put another nail in the “eating meat is OK coffin” when they reported on 448,000 men and women followed for years. Red meat, particularly processed red meat, was associated with early death. They estimated that 3% of all deaths would be avoided if we kept pepperoni, salami, hot dogs and other processed meats to less than 20 grams a day (think less than an ounce or one small strip of bacon).
Finally, this week the world went wild over data from the Cleveland Clinic published in a hard core science journal. Red meat is very high in a carnitine (think carne=meat) and egg yolks are very high in choline. For example, 4 ounces of cooked beef steak has 56 to 162 mg of carnitine while, by contrast, a half cup of asparagus has 0.1 mg.
The researchers reported that the intestinal bacteria of omnivores converted carnitine (and choline) into a chemical called TMAO that gets into the bloodstream and directly adds plaque to arteries. In fact, they showed patients with the most advanced heart disease had the highest blood levels of TMAO.  By contrast, vegans did not convert carnitine to TMAO and were protected by different gut bacteria.
Your diet is your personal decision, but consider adding the practice of ahimsa, non-violence to all living things including animals, to your yoga routine. As B. K. S. Iyengar wrote, “In the course of time, the practicioner of yoga has to adopt a vegetarian diet in order to attain one-pointed attention and spiritual evolution.”
And perhaps also to live a long life.
Originally posted on MindBodyGreen.com