Heart of Stone: How President Trump’s Calcified Heart Can Prompt the Public to Test Not Guess About Their Health (Sanjay Gupta, MD was right) 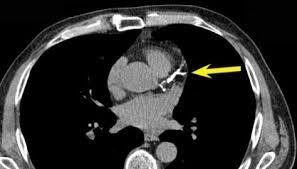 The President of the United States, Donald Trump, permitted the results of his recent medical records to be made public this week. During the election he released prior medical examinations and discussed them on the Dr. Oz show. Dr. Oz declared Trump “healthy enough” to serve as president. Trump’s records at that time revealed that his blood pressure was 116/70, his total cholesterol was 169, HDL cholesterol 63, LDL cholesterol 94, and that he had a coronary artery calcium score (CACS) of 98 in 2013. The records further revealed that he was taking a low-dose daily aspirin and rosuvastatin, a cholesterol-lowering agent.

What do these CACS mean for politics and health? First, a CACS is derived from a rapid CT scan of the heart done without injecting any contrast agent and is widely available at most medium-to-larger hospitals. The use of a CACS to risk stratify Trump’s heart health given in accord with American College of Cardiology/American Heart Association guidelines. The superiority of CACS to calculations of risk scores along based only on clinical measures has been demonstrated.

The ideal score on a CACS is zero indicating the absence of detectable calcified atherosclerosis and providing an excellent prognosis. So what does Trump’s new score of 133 mean? There are several web-based resources to put into perspective Trump’s results. The Multi-Ethnic Study of Atherosclerosis (MESA) has an online calculator to evaluate some aspects of the score. When Trump’s data is entered his score would be in the 46th percentile, not “normal” but average. His arterial age would be 75, older than his birth age. Furthermore, the data indicate that his 10-year Framingham hard coronary heart disease (CHD) risk (death, heart attack) is 12 percent.

Does the CACS of 133 in Trump’s heart arteries indicate that they are blocked up and narrowed? Fortunately for President Trump, that is unlikely. The higher the CACS the higher the probability of actual narrowed heart arteries, and scores well above 133 provide a threshold at which actual stenosis is a clinical concern in asymptomatic patients. In a recent investigation about the relationship of the CACS and significant heart artery narrowing, a CACS of 100–400 identified such narrowing in 13 percent of subjects. Using another definition of risk, his risk of either a significant heart narrowing or a high risk plaque in hs heart artery (likely the LAD or widowmaker artery) would actually be 27 percent for the combined end-point of significant narrowing and high-risk plaque.

What should President Trump do? If he scheduled a visit to my clinic I would review his diet, exercise, sleep and stress programs. He would get advanced laboratory studies of inflammation, cholesterol, and genetic risk. Increasing his intake of vegetables, fruits, legumes and whole grains while decreasing his intake of foods rich in added sugars and saturated fats (baked goods, sweetened beverages, cheese, processed and red meats, and processed packaged foods) would be of value in lowering his risk for heart events and diabetes mellitus while facilitating weight loss.

An ethical imperative would be to review the scientific data with him indicating that low-fat plant based diets and lifestyle may improve and reverse atherosclerosis. Novel supplements like aged garlic have shown promise for reducing “vulnerable” plaque in heart arteries and are used in my clinic. Clinical studies indicate that high blood levels of vitamin K2 may halt arterial calcification and would be discussed with Trump. Finally, the ongoing second phase of the Trial to Assess Chelation Therapy or TACT2 are provocative in terms of the reversal of atherosclerosis. Data on unique supplements shown to lower the CACS would be presented as an option for Mr. Trump.

Without a doubt, the medical news about President Trump’s heart and his rising CACS has drawn media attention. It has also prompted the public to call my clinic to ask about getting the test done. At my hospital the CACS is available for only $70. Since most people have no clue about the presence or severity of silent CHD, many will benefit if they get the calcium scan done.