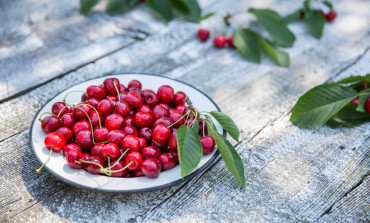 I am in my 12th week of working out with a trainer who is determined to make me stronger, fitter, and faster. But before I reach those endpoints we consistently achieve another endpoint: soreness.

You’ve probably been there. Crank out 50 squats and it’s no problem—until the next day when you get hit with a soreness that reminds you for days that you overdid it. This slow onset of pain after a workout is called delayed onset muscle soreness(DOMS). There’s much research on how it develops, with the focus on inflammation in the muscles.

But if you want to avoid taking a handful of ibuprofen, there are several natural strategies you can use as an alternative to help prevent or diminish the discomfort. Here are a few of my research-backed favorites:

In a study of healthy volunteers, drinking 12 ounces of tart cherry juice for four days before and after intense exercise reduced pain more effectively than a placebo.

If you are focused on never missing the fiber in fruit, try eating whole Bing sweet cherries. In one study, circulating markers of inflammation, like the C-reactive protein, dropped after 28 days of eating cherries.

In a 2011 study, volunteers ate 250 grams of blueberries every day for six weeks before running for two and a half hours. A control group was also tested with the run but ate no blueberries. After muscle biopsies were done on both groups, the results showed that the blueberry eaters demonstrated reduced oxidative stress and inflammation.

Research published in 2012 showed that massage therapy reduced inflammation and promoted the growth of new mitochondria in muscle cells to power their recovery.

In one study, subjects who used whole body vibration during a warm-up showed reduced symptoms of DOMS after exercise. And in a 2014 review of the literature on this topic, vibrational therapy was found to reduce muscle damage, as measured by an enzyme in the blood called CPK. Whole body vibration is available at many health clubs, and a machine can also be purchased for the home.

In a 2015 study, healthy subjects were asked to do repeated squats followed by either foam rolling for 20 minutes or no therapy. The result? Foam rolling was found to substantially reduce muscle tenderness.

In a small study, nine healthy males drank a caffeine drink or a placebo one hour before doing biceps curls. In the group that drank caffeine, soreness was significantly reduced when measured two and three days later.

There is some evidence that immersing yourself in cold water after exercise could reduce the onset of DOMS.

Grounding, or earthing, involves connecting to the earth’s electromagnetic field by walking barefoot on the ground. In an evaluation of grounded vs. non-grounded exercise, one study found that perceptions of pain and DOMS were reduced in the grounded group.

We all know it feels great to sit in a sauna after a workout—but until recently it wasn’t known that it could also help diminish DOMS. In a 2015 study, 28 subjects were studied, with half using sauna therapy before exercise. The result? Measures of pain were diminished in the group pre-treated with sauna.

The bottom line: With research suggesting that there are no safe nonsteroidal anti-inflammatory agents in terms of cardiovascular health, I encourage trying to prevent and limit the pain of DOMS naturally, before reaching for the pill bottle. The strategies outlined here can block or minimize that feeling of hurting for days. Personally, I find the combination of foam rolling, whole body vibration, and sauna to be a magical triad for recovering from fitness and for health in general. If you have a natural strategy for DOMS that works for you, let me know!