3 Reasons Why Yoga Is Great For Your Heart: A Cardiologist Explains 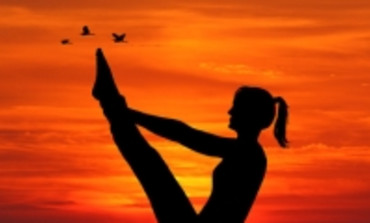 The practice of yoga is growing in popularity but it is still rare to see yoga classes incorporated into hospital programming or office based clinics. There are obvious mental and physical benefits to the combination of physical exercises, breathing and meditation.
Recent scientific studies have documented benefits of a yoga practice on important heart functions and a wider use of yoga in therapy of heart patients should follow.
1. Yoga reduces the frequency of atrial fibrillation (AF).
Atrial fibrillation is the most common cardiac rhythm disturbance and leads to frequent office and hospital visits, costing millions (if not billions) of health care dollars.
It’s an unpredictable disorder of the heart rhythm and can interfere with work, vacations and family gatherings when out of control.
Recently patients with intermittent AF were studied for three months as a baseline and then followed for three more months while practicing yoga twice a week for 60 minutes.
During the three months of yoga practice, episodes of AF dropped in frequency and patients rated their quality of life as better.  There were also decreases in blood pressure and resting heart rate. Patients up to age 80 were studied.
2. Yoga is good for people with high blood pressure.
High blood pressure or hypertension (HTN) effects millions of people worldwide and can result in heart disease, stroke, and kidney failure. The usual therapy is medication and dietary.  Recently 50 patients with HTN participated in a yoga practice for 15 days lasting 2 hours each session. Cardiac function was assessed before and after this training.
After practicing yoga for two weeks the resting heart rate, systolic and diastolic blood pressures were significantly reduced.  A comparison group that did not do the training did not experience these beneficial trends.
3. It reduces stress.
The autonomic nervous system (ANS) controls silently controls the function of the heart rate and blood pressure. A heart that is healthy demonstrates a wide swing in heart rate and blood pressure during inspiration and expiration and a disease heart shows little of this variability, a measurement called heart rate variability (HRV). HRV is influenced by the two parts of the ANS: the parasympathetic and sympathetic nervous system.
Scientists compared HRV in long term practitioners of yoga compared to matched controls who did not practice yoga. The HRV was increased in the yoga practitioners and they showed less sympathetic tone (stress, adrenaline) and more parasympathetic tone (relaxation, vagal) of their ANS. Their cardiac response to day-to-day stress was improved with yoga.
Yoga should be considered by patients and practitioners as another “tool” in the tool box of controlling stress, HTN, and heart rhythm disorders. As many cardiac patients are elderly, modifications such as chair yoga and predominantly pranayama breathing exercises may be necessary, but are still beneficial.
Namaste.
Originally posted on MindBodyGreen.com