What 6 World Religions Have To Say About Vegetarianism 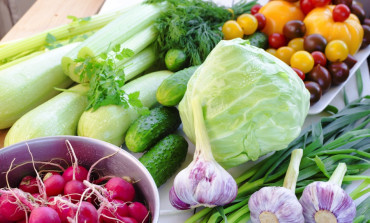 No, this is not a sermon. You have no excuse to fall asleep.

Vegetarianism has a strong tradition in Judaism, as the original design for the Garden of Eden. In an early chapter of Genesis it is written that, “I give you every seed-bearing plant that is upon the earth, and every tree that has seed-bearing fruit; they shall be yours for food.” The Book of Daniel is also viewed as a bedrock of religious support for vegetarianism. When the prophet Daniel and three fellow slaves were in captivity, they were offered the King’s rich diet but refused and asked for only “vegetables to eat, and water to drink.” This verse has led to both a 10-day cleansing program and the highly successful lifestyle change program at the Saddleback Church in southern California.

Jewish dietary law stresses avoidance of cruelty to animals, whether in the production of food or as beasts of burden. More can be learned about the rich culture of “green” Judaism at www.jewishveg.com. Out of interest, I wanted to find out if there are organizations promoting vegetarian diets in other world religions.

Christianity: Amongst the many branches of Christianity, the strongest teachings come within the Seventh-day Adventist Church. Founder Ellen White was vegetarian, and lacto-ovo-vegetarianism is officially promoted. Research on followers of this religion has been helpful in demonstrating better health and lifespan in those adhering to plant-based diets. There are groups of scholars that maintain Jesus was a vegetarian.

Islam: Vegetarianism among Muslims is an active movement stressing kindness, mercy and compassion for animals. The mainstream of Muslims who eat meat often follow laws called halal, which allow “clean” animals that are properly slaughtered. Certain animals are not permitted, depending on how they are killed, and pork is also forbidden.

Hinduism: There is a strong tradition of vegetarianism in the Hindu religions, stemming from the Krishna cult and the reverence for the sacred cow. Vegetarianism is viewed as a daily sadhana or spiritual practice by many Hindus.

Buddhism: There is a strong tradition of vegetarianism in Buddhism and Mahayah monks are strict followers as well as many lay followers.

Jainism: Originating about the same time as the Hindu and Buddhist religions, Jainism stresses the practice of ahimsa or non violence. Jains believe in abstaining from meat and honey, and harming any living creature — even insects — is avoided.

Lessons of mercy to animals and respect for the planet found in many of the world religions are just one of the many paths that may lead you to choose a plant-based diet. In our open society, where the cruelty and excess of concentrated animal feeding operations has been well documented in several popular movies, ahimsa takes on new urgency. Whatever basis forms your path towards whole food and plant-based meals, you will share a strong tradition with many ethically concerned individuals. In the words of Albert Einstein, “Nothing will benefit human health and increase the chances for survival of life on earth as much as the evolution to a vegetarian diet.”