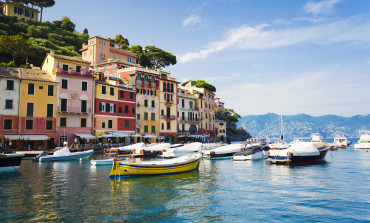 I just returned from a trip to southern Italy, where I fell in love with Rosmarinus officinalis. Rosemary, a fragrant herb related to mint that you can grow in your garden or buy at your local grocery store, has been the talk of the health world ever since researchers at the University of California, San Diego, announced new findings. They identified a small fishing village south of Naples inside the Cilento National Park that has an unusual concentration of citizens over the age of 100, with very low rates of Alzheimer’s and heart disease. Many research studies are now under way to identify why these people live so long and so well.

I was able to visit Accioroli and see the markets, streets, and people of this picturesque city. A quick perusal of the crystal-clear waters and sandy beaches, the mountainous backdrop requiring climbing hills, the clean air and the produce-packed stores indicated that this town was a living history of the now famous Mediterranean diet. In fact, Dr. Ancel Keyes, honored for introducing the Mediterranean diet to the United States, had a home he frequently visited just a few miles down the road from Acciaroli in Pioppi. (I also visited that town, and the beautiful museum honoring Dr. Keyes’ career is worth a visit.)

“Living well, longer” is the phrase used by the Blue Zones to describe a decade of research on five areas around the world that are also packed with centenarians. Whether Accioroli will prove to be a sixth Blue Zone remains to be seen.

But what was reported to be unique in this town was the prevalence of the herb rosemary in the residents’ diet. Rosemary showed up in almost every meal, and I saw the herb throughout the markets and stores. The healing power of spices to battle inflammation and promote healthy sugar levels, brains, and hearts is well-known. But rosemary may not be getting the attention it deserves based on these new findings in Italy. Here are some of the reported benefits of rosemary that you should know about:

1. It improves the health of arteries.

All arteries are lined with a single cell layer called your endothelium that covers eight tennis courts’ worth of surface area. In a 2011 study, healthy volunteers eating rosemary extracts showed healthier arteries after three weeks.

2. It can improve memory.

Shakespeare predicted it years ago—and now science has shown that measures of memory can be enhanced with rosemary.

3. It may suppress cancer cells.

Studies of rosemary or its extracts on the growth of cancers such as colon, pancreatic, and ovarian show it may be beneficial.

4. It may improve arthritis.

Rosemary has powerful anti-inflammatory effects, and preliminary data indicate it may have a role in natural therapy for arthritis.

5. It may improve cholesterol and blood sugar levels.

Rosemary may activate a pathway called AMP kinase, the same pathway triggered by the drug metformin and apple cider vinegar. As such, improvements in measures of blood sugar and cholesterol may follow.

6. It may help with hair loss.

In a study randomizing 50 men to rosemary oil for hair loss compared to a prescription drug used for that condition, a similar increase in hair count was seen in both groups.

The bottom line: The key lessons of Cilento National Park, the home of the Mediterranean diet, are to eat a locally sourced plant-based diet low in fats (2 tablespoons a day of freshly pressed olive oil is typical, without butter or animal fats), complemented by low-alcohol red wine and whole-grain breads made at home, surrounded by friends and family.

The long-living people of Acciaroli also remind us that herbs and spices, preferably homegrown or sourced organic in markets, are some of the most concentrated forms of life-sustaining phytonutrients.

I recommend rosemary, whether for “remembrance,” heart health, hair loss, or other possible benefits, as a daily addition in the quest for the good life, or la dolce vita. To get started, here’s a recipe for a simple rosemary vinaigrette that you can use to spice up your health—and hopefully achieve the healthy longevity of the Italian southern coast:

Combine the ingredients and whisk or blend until smooth.