Why I Just Say No To GMOs: A Cardiologist Explains 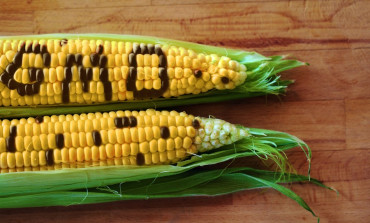 I was asked this week to speak about the effects of genetically modified foods on the cardiovascular system for a group of health care providers and the public. Was I shocked to learn that eating GMO foods can increase the rate of heart attacks, strokes, and bypass surgeries in multiple medical studies in humans?
No … because these studies don’t exist.
In fact, I couldn’t present a clear scientific argument linking GMO foods with the development of heart disorders. I’m not an alarmist and I believe in the scientific process. However, on a personal level, I’ve instituted tighter rules in my home about food purchases. The more I learned about GMOs, the more I decided to just say no.
As it says in the Yoga Sutras of Patanjali, “Avert the danger that has not yet come.” Here’s what I learned about GMO foods that moved me to this decision:
1. GMO foods have less nutrition.
Just this year, we learned that there is a striking difference in the nutritional content of corn produced with GMO compared to corn produced without GMO. Foods grown with GMO can have half as much sulfur and potassium and significantly less magnesium than non-GMO versions. (Why? Because the inserted genetic material is only on, not off at times, the demand for cell energy may rise and deplete the cells of nutrients.)
As a cardiologist, I know how essential nutrients such as potassium and magnesium are in controlling blood pressure and arterial health. Sulfur is important in the production of glutathione, the major cellular antioxidant counteracting the stress of using oxygen for energy production. What does it mean to my family to feed them nutritionally deficient vegetables and food items? Again, I am concerned.
2. Rats who were fed GMO diets died sooner than rats who were GMO free.
In the first-ever GMO feeding study, European researchers fed rats either chow made with 11% GMO products or GMO-free chow for two years. By the 17th month of life, rats fed the GMO chow were 5 to 6 times more likely to have died. Of those rats who’d been fed GMO feed, the females grew giant tumors in their reproductive organs, while the males grew tumors in the liver. Liver and kidney abnormalities were seen frequently in the GMO fed rats. I know we do not have human data, but I’m concerned what this data could mean for my wife and children.
3. GMO foods contain viruses that we don’t yet fully understand.
In order to create GMO foods, new genetic material is inserted into the cell nucleus, often with a virus that “turns on” the new genetic material. One problem is that there is no material that can turn it off and these cells will be working to replicate themselves non-stop. We all have a variety of “natural” viruses in our body and the concern is whether or not the altered viruses inserted into GMO food could infect viruses already inside us and cause them to grow abnormally. Sounds like a science fiction movie.
Another component of the new material is another gene that makes the GMO plant cells resistant to an antibiotic.  This process is used in over half of the methods of creating foods that contain GMO, and I am alarmed about the possible impact of new viruses on the health of my family. I am concerned whether new diseases from these “super” viruses never before seen in our body could result in new diseases and cancer.
4. Mice who were fed GMO foods developed damaged red blood cells.
Brazil is the second largest producer of crops modified with GMO. In March of this year, Brazilian researchers studied the effects of Bt, a microbial control agent used widely on plants with GMO that resist Bt. Among the mice fed the GMO-laced chow, the scientists observed hematoxicity, (blood cell damage), with significant injury particularly to red blood cells. (It’s possible, but not yet clear whether or not this could contribute to anemia in animals and humans.) These researchers called for more studies on the effects of GMO altered foods on “non-target” mammals, which would be you and me.
5. Eating GMO foods led to sterility in rats.
In 2006,  Russian researchers fed rats chow with added soybeans using GMO or regular chow and looked at fertility. Guess what? Of the rats were fed GMO, fewer reproduced, and those who did had offspring with smaller birth weight. By the third generation Fewer rats were born at a smaller birth weight to the rats fed the altered soybeans and by the third generation of rats the animals were sterile.  The effects of food produced with GMO on sex hormones is an area I am concerned about for my family.
What will we do?
What can you do?
There is a Chinese phrase that “Pure water has no fish.” It will be very hard to have a completely GMO-free lifestyle. The checklist in my home to make it into the kitchen is already complex (Is it kosher? Vegan? Nut-free? Gluten-free? Non-GMO?), and we will do our best.
We will read the Environmental Working Group for updates and opt for organic when buying anything from the “Dirty Dozen” produce list. We follow the Non-GMO Project and support movements for mandatory labeling.  I have begun to use an app on my smart phone that assists in shopping GMO-free.
The rising awareness and concern over this topic has forced Monsanto and other major producers of GMO produce to hire new marketing consultants. (Turns out, being referred to as “Satan” is not good for their brand.) In my home town, we just had a major maker of tortilla chips announce sourcing of corn and cottonseed oil from non-GMO producers, and other manufacturers will follow suit.
I invite you to get involved in this important area of food safety as we have the power to be heard and improve the acceptability of our food supply.
Originally posted on MindBodyGreen.com