What You Need To Know About That 1-Minute Exercise Study: A Cardiologist Explains 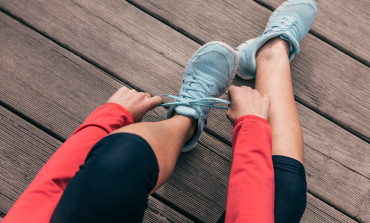 You know the drill by now. Regular exercise can help you manage your weight, blood pressure, sugar, and cholesterol; lower your risk of heart disease and cancer; and prolong your life. Not to mention, it can also boost your brain and sex life.

But, although we all know the benefits of exercise by now, daily life can also get in the way: The dogs need to get out to pee, the lunches aren’t made, your work bag isn’t packed, and it’s raining so traffic will be a mess. Damn, you thought you’d have 45 minutes to do that circuit workout with bands and weights in the basement, but now there’s no time.

Or is there? What if just one hard minute of exercise, taking a total of 10 minutes of your time, could benefit you as much as the planned 45-minute workout that’s not going to happen this morning?

A recent study suggests it might. This new data has added to the growing interest in high-intensity interval training workouts as an alternative to spending an hour or more at the gym. It started with Japanese researcher Dr. Izumi Tabata, and the workout that bears his name, demonstrating in the 1990s that a four-minute intense workout could provide benefits equal to a 45-minute moderate workout. The action then shifted to Canada in 2006, where a research group headed by Dr. Martin Gibala confirmed the benefits of short and intense workouts.

The new study, published in April, pushes the envelope even further, by assessing whether just one hard minute of aerobic exercise provides any benefits.

The researchers recruited 25 sedentary men for the 12-week study. They all had exercise testing before and after, lab studies, and muscle biopsies (serious volunteers!). Of the group, six were asked to remain sedentary, 10 were asked to do moderate-intensity bicycle exercise for 50 minutes three times a week, and nine were asked to do a 10-minute workout three times a week. Their workout was three bicycle sprints for 20 seconds, with two minutes of milder cycling in between the intense sets, framed by a two-minute warm-up and cool down. In other words, there was just one minute total of “all-out” exercise.

In other words, the two groups were remarkably similar in terms of health benefits. “Most people cite ‘lack of time’ as the main reason for not being active,” said the lead researcher. “Our study shows that an interval-based approach can be more efficient—you get health and fitness benefits comparable to the traditional approach, in less time.”

So if you’re someone who constantly checks your watch to see if you can make it to the gym before picking up the kids from school, the study’s findings are something you can take action on today.

I strongly recommend you grab a 10-minute workout with one total minute of intense exercise, rather than skip the activity altogether, if you are without heart or orthopedic limitations. It may not be the solution to weight training or flexibility, but as this study shows, we appear to be like cheetahs: engineered to benefit from a burst of activity.