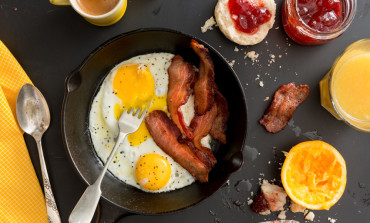 While hospitals are often thought as places of healing and health, they’re notoriously lacking nutritious foods to its staff and patients. For example, many hospitals still offer McDonald’s in their food courts. I’ve said it before, but the food offering in hospitals needs to change if we want to support a healing environment.

Finally, in one of the boldest moves of healthcare history, the Cleveland Clinic has taken the World Health Organization’s announcement about the dangers of red and processed meat to heart, banning foods like bacon, hot dogs, salami and bologna from patient trays, cafeterias and vending machines. This sets precent for hospitals across the country and can ultimately help healthcare professionals and hospital patients obtain and maintain a healthier lifestyle.

For paleo skeptics (or anyone thinking twice about not bringing home the bacon), foregoing bacon pays off more than you think. While processed red meats are often linked to cancer, heart disease and diabetes, it turns out that there’s one more illness to add to this list: lung health. Studies on the correlation between chronic obstructive pulmonary disease (COPD) and processed red meats are strongly suggestive.

So the data is there, but why do processed meats worsen lung function in COPD? At least one theory is that the animal based nitrites cause nitrogen-induced damage to lungs.

Decide to ditch the bacon? My suggestion for those foregoing processed red meats, whether you’re in a hospital or not, is to replace them with more health-enhancing, nutrient rich legumes like beans, peas and lentils.