Is the Low-Carb (animal based) Diet a High Coffin Diet? Two More Nails to Consider 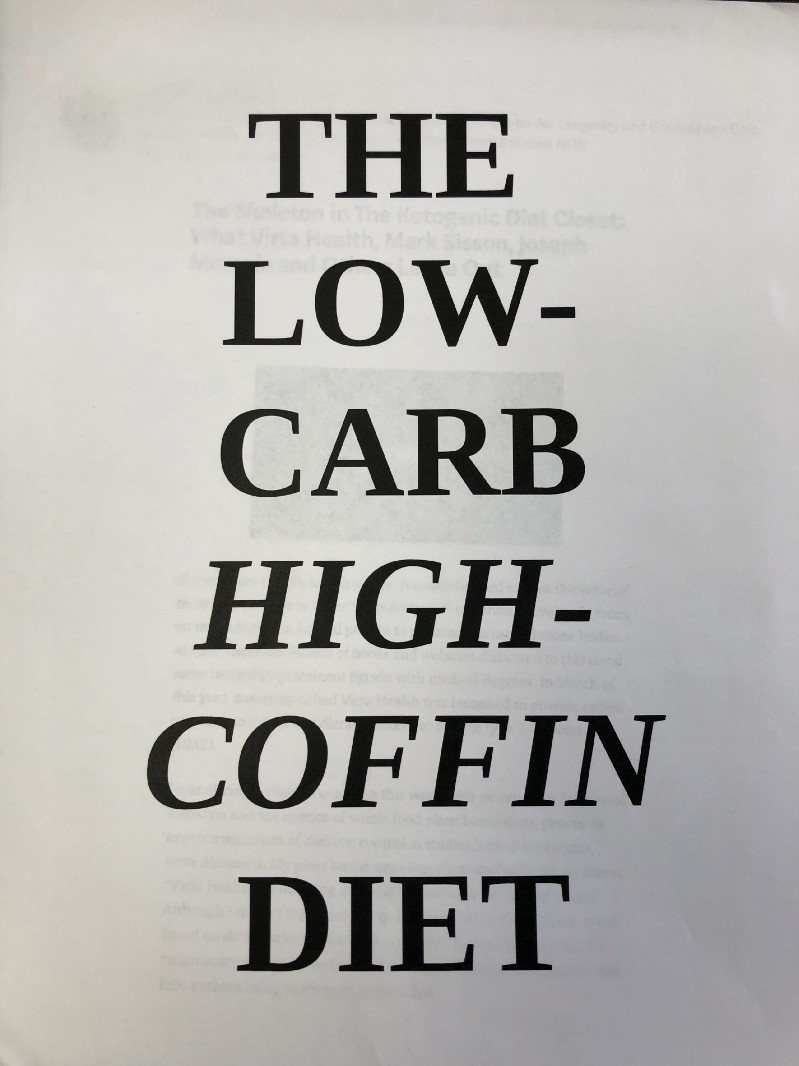 The rise in obesity, type 2 diabetes mellitus, a dropping lifespan in the United States, and a hunger for an optimal healthspan free of chronic diseases should constantly prompt the question “what is the optimal diet for the human species?” In my opinion, that question has been answered most eloquently and openly by the credo of the True Health Initiative

However, contenders for the throne appear and the low-carb/ketogenic camp is making the most noise in the media and to a far lesser sense, medical research. However, two new research studies, one published in a prominent peer reviewed journal and one just presented at a major medical meeting, have added two new “nails” to the idea that a long-term low-carbohydrate (low-carb) diet, usually high in animal foods, increases mortality. And, mortality is not compatible with healthspan.

Before looking at the two new studies, what does the prior medical literature, flawed perhaps by being largely associations of diet and outcome but peer reviewed and large nonetheless, speak to about low-carb diets. I include both sides of the aisle in fairness. First the studies indicating a risk to the low-carb diet.

1) Noto et al. This meta-analysis of 272,216 subjects studied for diet and mortality reported that the risk of “all-cause” mortality in those responding that they followed a low-carbohydrate diet was approximately 30% higher than other subjects.

2) Li et al. The Harvard School of Public Health studied over 4,000 men and women who had survived a heart attack. Those eating a lower carbohydrate diet higher in animal protein and fat was associated with a higher risk of all-cause and cardiovascular mortality. This increase was not identified in those responding they ate a plant-based low-carbohydrate diet.

3) Sjogren et al. In an analysis of over 900 elderly Swedish men, a Mediterranean diet pattern reduced mortality while a carbohydrate restricted diet was associated with a 20–40% increase in all-cause and cardiovascular mortality respectively.

4) Fung et al. In an analysis of nearly 130,000 subjects followed by the Harvard School of Public Health, subjects following an animal food based low carbohydrate diet had increase in all-cause, cardiovascular and cancer mortality while there was a reduction in mortality in those following a plant based similar diet pattern.

6) Lagiou et al. In a research group of over 42,000 Swedish women, respondents with a dietary pattern of higher protein and low-carbohydrate was associated with higher all-cause and cardiovascular mortality.

7) Trichopolou et al. In a Greek population of nearly 23,000 subjects, those following a low-carbohydrate and higher protein diet had higher all-cause, cardiovascular and cancer mortality.

Are there any dissenters to the seven studies above? There are a few.

1) Nakamura et al. A Japanese series of 9,200 men and women found a lower risk of cardiovascular and total mortality in women eating a “moderate diet lower in carbohydrate and higher in protein and fat” of any source.

2) Nilsson et al. In a study of over 77,000 Swedish citizens, a lower carbohydrate high protein diet was not associated with mortality.

3) Halton et al. In 82,000 plus women part of the Nurses’ Health Study, respondents with diets lower in carbohydrates and higher in protein and fat were not associated with an increased risk of cardiovascular disease.

The Two New Studies
1) Seidelmann et al. The prestigious journal Lancet Public Health published this two-part study. The first part analyzed dietary patterns in 15, 428 adults in the ARIC study over 25 years of follow up. The diet was assessed twice during that time period with a 66-item food frequency questionnaire. Intake of carbohydrates as a % of total calories formed a U-shaped curve with low carb diets associated with increased mortality risk. The lowest risk was at 50–55% of calories from carbohydrate macronutrients. The second part of the publication was that a low-carbohydrate diet group again was associated with a higher risk of early death. Finally, in this study, if carbohydrates were replaced with animal-derived fat or protein, death rates were increased and if replaced with plant-based foods, mortality rates decreased significantly.

2) Banach et al. The second study driving a nail in the coffin of low-carb, animal based, diets has recently been presented at the European Society of Cardiology but has not been published in full at this time. Researchers from Poland analyzed 24, 825 participants in the NHANES survey in 1999–2010 and followed for an average of 6 years. Another part of the study analyzed 450,000 subjects using the meta-analysis technique. Overall the results showed that those eating the lowest percentage of calories from carbohydrates were 32% more likely to die prematurely, 51% more likely from coronary heart disease, 50% more likely to die from brain diseases like stroke, and 35% more likely to die from cancer. The lead author called for avoidance of low-carb diets.

Not surprisingly, there has been backlash since the publication of the full study in Lancet Public Health. Some have criticized the study design and others have criticized the well known rule that “association is not causation” (on the other hand, it might be causative). There are rarely “perfect” human nutrition studies, but the weight of the evidence overall is alarming for the long-term use of low-carb diets comprised of predominantly animal sourced foods.

As I said recently on The Doctor’s Show, if the public appreciates that the low-carb diet may be a high-coffin diet, they might want to return to predominantly fruits, vegetables, legumes and whole grains for 75% or more of their food plate.